The Sultanate of Oman on the Arabian Peninsula has a coastline of over 2000 kilometers. Its almost endless dream beaches on the Indian Ocean, the Gulf of Oman and the Persian Gulf are ideal for swimming, surfing and diving. The country also has a lot to offer in terms of landscape.

The desert landscapes of Oman, the Bedouin camps, the date and palm groves of the oases, its majestic palaces and fortresses from pre-Islamic times are part of the magic and the enormous cultural wealth that has been preserved from the ancient sea-trading nation to this day.

In the following we present you the most exciting tours, most beautiful attractions and best sights in Oman. 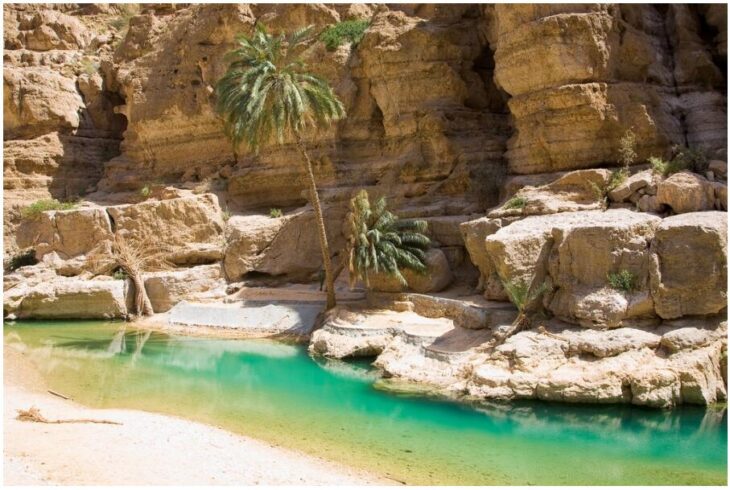 Muscat, which means place of fall, is located in the middle of steep cliffs in a bay on the Gulf of Oman and has a population of around 800,000. Here, in the capital of Oman, the great Sultan Qaboos Mosque was opened in 2001, one of the largest mosques in the world. The building, which was constructed from 300,000 tons of Indian sandstone, was estimated to cost around $ 100 million to build. The prayer rooms of the mosque hold over 6,000 people.

The entire mosque complex covers an area of ​​4 hectares and can accommodate up to 20,000 visitors. Five minarets symbolize the five duties of Muslims, the pillars of Islam. The imposing complex is adorned with precious wood carvings, calligraphy, crystal chandeliers and gold-plated marble work. The Sultan Qaboos Mosque can also be visited by non-Muslims.

Surrounded by palm groves, at the foot of the Hajar Mountains, the oasis city of Nizwa is one of the oldest cities in Oman. From the 6th to the 7th centuries, Nizwa was the capital of the country. Today the city has around 72,000 inhabitants. The huge fortress of the city of Nizwa was built in 1668 by Imam Sultan Bin Saif Al Ya’rubi. The work lasted twelve years until the fortress with its 30 meter high tower with a 45 meter diameter and the cannon platform with space for 24 cannons was completed.

The Fort of Nizwa is one of the outstanding sights in Oman and is the most visited national monument in the country. At the Nizwa market, vendors sell meat, fish, fruit, vegetables and spices as well as leather and pottery. The town’s blacksmiths are particularly well-known, making the traditional Khanjar dagger out of silver, gold jewelry and utensils out of copper.

Jabrin Castle is the palace of Sultan bin Saif al-Ya’arubi, built in 1670. It is adorned with magnificent frescoes, calligraphy, wood carvings and stucco work. Conceived as a triangular building, it houses 55 rooms on five levels, including the impressive “Sun and Moon Room” where the Sultan received his guests.

You can also visit secret passages and shelters for the sultan’s private bodyguard, as well as the study rooms in which the scholars gathered at court could exchange ideas on astronomy, medicine and Islamic law. From the terrace of the palace there is a spectacular view of the date groves that surround the city for 8 kilometers.

At 2,980 meters, the Jebel Shams is the highest mountain range in Oman. Around 250 kilometers away from the capital, Muscat, the northern peak of the Jabal Shams is located in a military restricted zone that is shielded by a radar station and is therefore not accessible. To the southwest of it there is a tourist area at an altitude of about 2000 meters.

From here the southern summit of the Jabal Shams can be hiked on a trekking route. Whether on foot or by car – once the Wadi Nakhar has been climbed, the Sonnenberg rewards its visitors with moderate altitude temperatures of around 20 ° C and a spectacular view of the bizarre canyon landscape and the Wadi Ghul. The gorge cut into the Jabal al-Akhdar mountains about a thousand meters deep.

5. The royal city of Bahla

The old royal city of Bahla and its fortress Hisn Tamah were built in the 3rd century BC. Built in BC. A 13 kilometer long mud brick city wall surrounds the oasis, its palm avenues, the mosque, the traditional souks and the fort. Since the Fort Hisn Tamah was added to the list of UNESCO World Heritage Sites in 1987, the fortress has been undergoing renovation strictly traditional building methods. The fort has been open to the public again since 2014. Today it is one of the most visited attractions in Oman.

Various legends and myths have grown up around the origin of Hisn Tamah. Some say that the fort’s walls were magically built by a woman in just one night. Others say that work on the fortress stalled several times because what was built during the day collapsed due to magical powers. There is a plausible explanation for these legends: It simply seems inconceivable that humans could have built such an impressive structure without supernatural help! 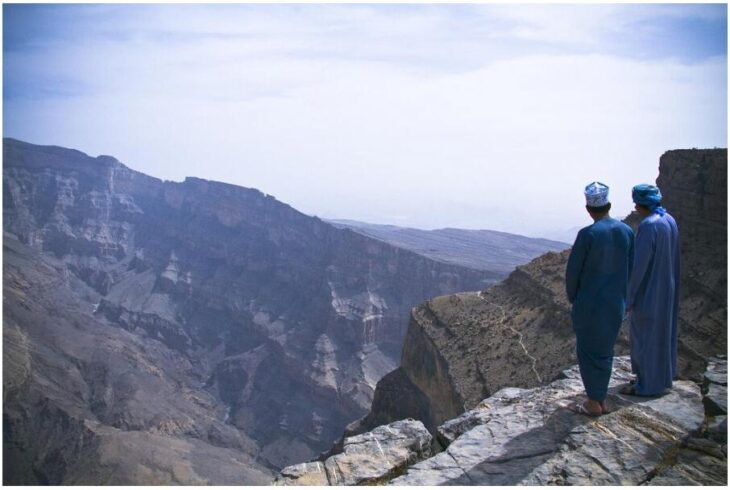 Built in pre-Islamic times, the fortress in Wilayt Nakhl is one of the most famous sights and most important buildings of historical importance within the Sultanate. Surrounded by palm and date groves, Husn al-Him, as the defensive fortification of Nakhl is also called, lies on a rocky hill, the irregular shape of which it adapts masterfully to its architecture.

The Fort of Nakhl is located directly on Wadi Raqim and looks out over the surrounding desert and mountain landscape from a height of more than sixty meters. In the Wadi Hammam, a few kilometers away, are the hot springs of Ain A’Thawwarah. Once a week there is a goat market within the walls of the fortress.

7. Salalah and tomb of the prophet Job

The city of Salala (mostly in German Salalah) at the foot of the Dhofar Mountains, surrounded by tropical plantation landscapes, was the capital of Oman until 1970. It is still the third largest city in the country. The fertile Dhofar region benefits from the numerous freshwater springs in the area. As the home of the frankincense tree, the area around Salalah and the ancient frankincense port of Al-Baleedauch is also known as the land of frankincense. The region is particularly rich in flora and fauna.

Khor Salala, to the west of the city, is a bird sanctuary that is home to many species. There is a leopard sanctuary near the town of Jebel Samhan. The cityscape is shaped by oriental vaulted buildings and traditional limestone houses. About 30 kilometers northwest of Salala is the grave of Job, which is also mentioned in the Koran as Nabi Ayup. Today there are several hotel resorts in Salalah, the region is known as the “Caribbean of the Orient”.

The 12.5 hectares of Wahiba Sands desert in eastern Oman is also known as Rimal al Wahiba. In authentic Bedouin camps you can experience life in the desert up close: Wandering sand dunes, grazing camels and the resilient ghaf trees that live from the morning dew and dig their roots up to 30 meters into the salty soil in order to survive.

This natural spectacle makes the area a popular attraction in Oman. One of the oldest fortresses in Oman is also located on the edge of the Wahiba Sands. The fortress of the Al Mintarib oasis was built in the 13th century and restored in 1991 and is open to visitors.

In the middle of the dry landscape and on the edge of the Wahiba Desert lies Wadi Bani Khalid. It is surrounded by high mountains, sometimes colored green due to their high copper oxide content, then again reddish in color when the iron ore components predominate in the rock. Its river bed is up to four kilometers wide and mostly dries out completely until the river from the Hajar Mountains makes its way back into the valley during the rainy season.

The water from the springs of Dawwah, Hamouda and Sarooj collects in natural pools up to two meters deep, shimmers turquoise and offers a clear view of the native freshwater fish that live there. Small, rushing waterfalls run along the way up to the Khaf Muqhal. The dark cave leads deep into the mountain and hides underground storage chambers for the sultan’s treasures.

Sultan Qaboos ibn Said called Sultan Misfat Al Abriyeen his favorite village. It is the perfect example of an Omani village in which time seems to have stood still since the first houses made of clay and natural stone were built around 200 years ago. A historic city wall surrounds the mountain village, on the slopes of which the residents have created field terraces.

Misfat Al Abriyeen is supplied with water by the Falaj canals. The Falaj irrigation system was developed in Oman over 1,500 years ago. The slope of the ground is cleverly used to direct water from a distant source or a wadi into villages and towns through underground and above-ground channels. 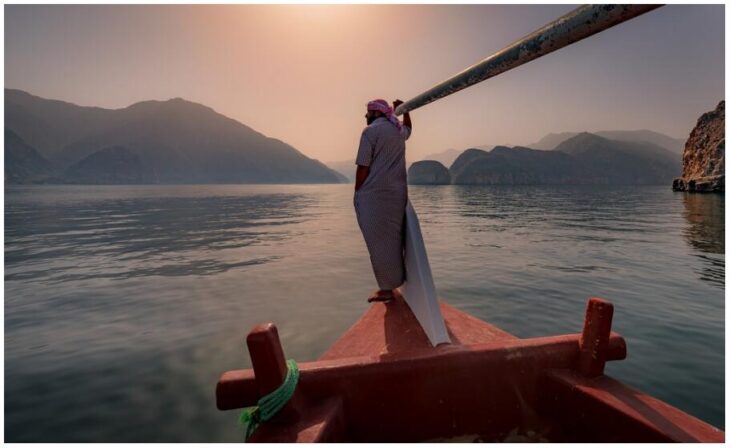